An eye on Dentech China

An eye on Dentech China

In this case it’s keeping an eye on Asia and in particular China. 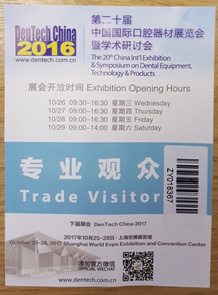 I had a little trip to Shanghai and the dental show there in October 2016 (Dentech China 2016)  It was their 20th International exhibition and as usual a very busy show. Unlike UK dental shows, the Chinese go ready to buy and a huge amount of business is done during the show.

I remember one stand (or booths as they call them) with 15 staff all serving customers with everything from burs to pindex machines. So busy really means busy!

I wondered whether there was more progress in their domination of the world and in particular, ‘our patch’, the UK. Are we under the same threat of work vanishing overseas as previously thought?

It’s a very difficult question to answer, but there have been changes in China which will have a bearing on the outcome. The housing bubble, which has seen many new building works half-finished and left to rot … the Government dipping into their reserves to keep the show on the road,  but this cannot go on … and now there is a credit bubble, sure to end in pain for many.

Another more subtle change has also been occurring: robots have arrived. The west is automating everything possible. I recently saw a large tool making operation in Germany with only one man to be seen and he was only setting up one of around 60 to 70 machines.

The advantage historically in Asia has been cheap labour, but labour was not needed in this factory, just highly skilled engineers/technicians at the forefront of robotics, but those skills are short in Asia. The German ‘head of manufacturing’ was not in the slight bit worried.

So things are changing, and that means new opportunities. The good businesses in China will progress and the ‘pile ‘em high, sell ‘em cheap’ brigade are under a lot of new pressure, and certainly not geared up for the future.